New England Revolution head coach Brad Friedel remains upbeat in the wake of the team’s 3-2 defeat to Philadelphia Union at the Gillette Stadium. Philadelphia managed to secure a 2-0 lead within the 25th minute of the game before New England levelled the scores in the second period. Despite this, the game ended on a sour note for Friedel’s men, who eventually lost after a late penalty goal from Union’s Fafa Picault. 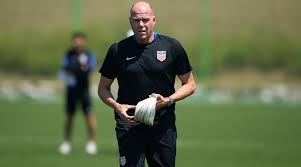 With the result, New England have gone without a victory in six matches and have sank below the playoff positions – with Philadelphia and Montreal Impact occupying the fifth and sixth positions respectively with a one-point advantage. Speaking after the game, Friedel admitted that the club are certainly not on the right route and a solution should be found with the pedigree of coaches working with the squad.

He said: “Not myself or anyone on the staff have been on losing teams. We will find a way to win. That’s how we are. If it’s personnel changes, it’ll be personnel changes; if it’s tactical changes, it’ll be tactical changes, but we will find that formula. We didn’t get to where we are as coaches, either in our playing careers or coaching careers, by accepting losing. We’re not far off from being a very, very good team. We have to keep working. Attention to detail, that’s where we’re at.”

Meanwhile, Friedel once more refused to single out individual players but he agreed that there were some avoidable defensive mistakes against Philadelphia – namely Antonio Delamea’s handball which proved costly in the form of the match-winning goal. New England are scheduled to face DC United in their next league meeting and the match could offer them the chance to return to winning ways, given the Capital outfit have looked out of sorts this term. DC are currently rooted to the bottom of the Eastern Conference, though they have three more games to play than New England.